Kim has recently celebrated over three decades teaching in the arts industry. During her career, she has been a performer, choreographer, adjudicator, teacher and studio owner. Growing up in a “dance family” (Audrey Meredith Dance Centres), she is a graduate of Kent State University- Teachers Training Program. She has achieved 2 teaching certifications through Dance Masters of America and Canadian Dance Teachers Association. Kim has worked with many Ontario production and theatre companies and then decided to blend her passion of dance with her love of theatre to create “Milton Youth Theatre Productions” – Milton’s 1st youth theatre company.

Katie is a local private music instructor and a recent graduate of Queens University. She has worked as a Director, Camp Director and Musical Director in various companies from her hometown of Milton, Ontario and in the Kingston area. Recent shows she has directed for include, Children of the Isle, Sasquatch, Ariel 51 (KYAC), and The Musical Adventures of Flat Stanley (MYTP). Returning in May of 2011 from a year abroad studying in England at Herstmonceux Castle, she has travelled all over Europe learning about different musical cultures and traditions and hopes to bring her new found knowledge to her classes. She has also performed in various MYTP productions in the past including The Wiz, Beauty and the Beast, Seussical and The Music Man. Katie currently teaches at various Montessori schools in the area, including The Montessori School of Milton and Stirling Montessori Academy. Katie has been actively involved with MYTP from its inception, as both a student and instructor, and is very excited to be in a directing role. Katie would like to thank the entire MYTP community for creating a such a wonderful and positive time in her life.

Jasmin is a freelance director and stage manager. She has worked on a variety of productions that range from dance and musicals to fashion shows and special events. She has studied performance production at Ryerson University and has recently returned from a Fringe Theatre Festival tour across Canada as the stage manager with the Flotsam Theatre Company. In the summer of 2014, she took the opportunity to visit Milan, Italy to develop a theatre program at a children’s music camp. As well in the Fall of 2014, she worked with the Terry Fox Foundation as a school ambassador travelling to schools across Ontario to give presentations on behalf of the foundation. Jasmin is always looking for new opportunities to educate students and to help mold well-rounded performers. MYTP is home to Jasmin and she has a lot to thank them for. For one, she is thrilled to be back as she has been playing roles on and off stage with the company since it’s 2nd year of inception.

Brooke is thrilled to have finally made it to the Instructor’s page! After 15 dedicated years to her Mom’s company, Brooke has participated in every aspect of Milton Youth Theatre Productions. Being only nine years old when Kim started MYTP, Brooke performed in multiple shows and was a camper for many years before she became a camp Counselor, later to become a camp Director and Assistant Choreographer as well as Director. Coming from an “Arts” family Brooke grew up in the Dance Studio., competing for a decade (with The Dance Pac) in all types of Dance, Brooke’s specialty was Musical Theatre in which being award many awards and Judge’s Choice. Although Brooke didn’t pursue the Arts in post-secondary, she remained very much involved in MYTP throughout her schooling. While completing her Advance Diploma is Business Administration Marketing, Brooke Directed (Choreographed and assisted in costume design) both Willy Wonka Jr. (2014) and Doctor Doolittle (2015) Spring productions at MYTP. After graduating with Honours from Sheridan College, Brooke is happy to be back and bring more to the creative team! It is a joy for her to be working alongside Jasmin and Katie as she is Assistant Director and Choreographer for both productions in our 15th Anniversary Season.

Other than the added creative value Brooke brings to the stage we are sure you’ve seen her creative skills on our social media accounts and many Newsletters and Advertisements. Brooke is a triple threat performer, who we can’t seem to keep off the stage but we are happy to have her on and off the stage as part of our creative team! She has some big ideas to help MYTP continue to grow, educate and inspire.

Darryn has been Resident Musical Director with Milton Youth Theatre Productions since its inception. Together, Kim and Darryn have seen this program grow over several years into a wonderfully creative jumping ground for young people. Before working at MYTP, Darryn trained at St. Michael’s Choir School, an intensive music school in Toronto. After graduation, he took on many private vocal teachers to further his education. Leander Mendoza, Carol Forte, and Falconer Abraham taught Darryn many different techniques, including Opera and Broadway Voice production, Vocal Science and Speech Level Singing. Today, Darryn works professionally as a Music Director, Teacher, Accompanist and Performer, depending on what opportunities arise. Darryn has served as Resident Musical Director for The Brampton Theatre School, The Studio School of Dance and The Dance PAC before MYTP, and has also worked with professional theatre companies, including Stage West Calgary (Sweet Charity & 70’s Fever), Theatre Aquarius (Seussical), Talk is Free Theatre (Kiss Me, Kate) and Brampton’s Flower City Theatre Festival (A Funny Thing Happened on the Way to the Forum, I Love You, You’re Perfect, Now Change & Tick, Tick…BOOM!). It is a wonderful feeling to know that you have the opportunity to impact the life of a young person. Darryn is a member of Milton Music Teachers’ Association. 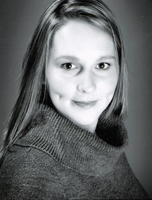 Katy Eldridge is so excited to be working with this wonderful company for a fifth season! Katy is a dramatic arts teacher in Mississauga. With her passion for theatre and love of teaching she has been directing students in plays for many years. Some notable plays include: Seven Stories (MYTP) Scaredy Kat (MY Stage Left), Grease the Musical (MYTP), Dracula (MSS), Beauty and the Beast (MYTP) and Wizard of OZ (BTS). Katy has a Master of Education from the University of Toronto/OISE, a Bachelor of Education from Queen’s University and a Bachelor of Arts Honours from York University where she studied in the Theatre program.

Shannon is thrilled to be returning for another year at MYTP! She has loved performing and entertaining since the age of two when she began dancing. Through the years her love of dance grew to the love of both singing and acting. Shannon is a graduate of Randolph Academy for the Performing Arts in Toronto, where she worked with amazing teachers and directors. Some of her credits include, Guys and Dolls (Chemainus Theatre), High School Musical 2 (URP), Something Rockin in Demark (Capricorn 9 Production), Joseph and the Amazing Technicolor Dreamcoat (Encore Entertainment), Thoroughly Modern Millie (RAPA). Besides her love of performing on stage, Shannon also loves to be behind the scenes where she choreographs and directs. Credits include Nunsense (Queen Theatre), Music Man (M.Y.T.P), Beauty and the Beast (M.Y.T.P), Aristocats (M.Y.T.P), Oliver (M.Y.T.P) Grease (M.Y.T.P) and Flat Stanley (M.Y.T.P) Shannon is excited to be a part of MYTP’s 10 season!!

Michael has been involved in the Toronto music and theatre communities since 1998, following over ten years of training with both the Royal Conservatory of Music and St. Michael’s Choir School. He has a B.A. from the University of Toronto in music and drama, and has studied with Carol Baggott Forte, Stephen Hegedus Gabrielle McLaughlin, Kristine Anderson, and. Michael has sung with many choirs as both soloist and chorus (including Victoria Scholars, Cantemus, Musikay, Tryptych, Oakville Choral Society, and the Georgetown Bach Chorale), as well as various church choirs, for which he continues to sing and accompany. Theatrically, Michael started as a stage manager in university. He soon landed a performance position with Famous PEOPLE Players black light theatre, coaching adults with special needs for over eight years. Between 2010 to present, Michael has been performing Gilbert & Sullivan Community Theatre with St. Anne’s Music and Drama Society (as tenor romantic lead). Michael’s directorial debut occurred in 2010 when he produced, co-wrote, and arranged the music for a Nativity play called “Immanuel”. The thirst to direct and work in a “coaching” capacity was born at that moment. He has worked continuously in this vein by organizing Christmas concerts, entertaining at retirement homes, and teaching piano and theory. Michael’s mission to help develop young singers into confident soloists and team- centered vocalists who can nail stellar harmonies.

Michael cannot wait to climb aboard MYTP this season and get to work!

Learn about our amazing instructors